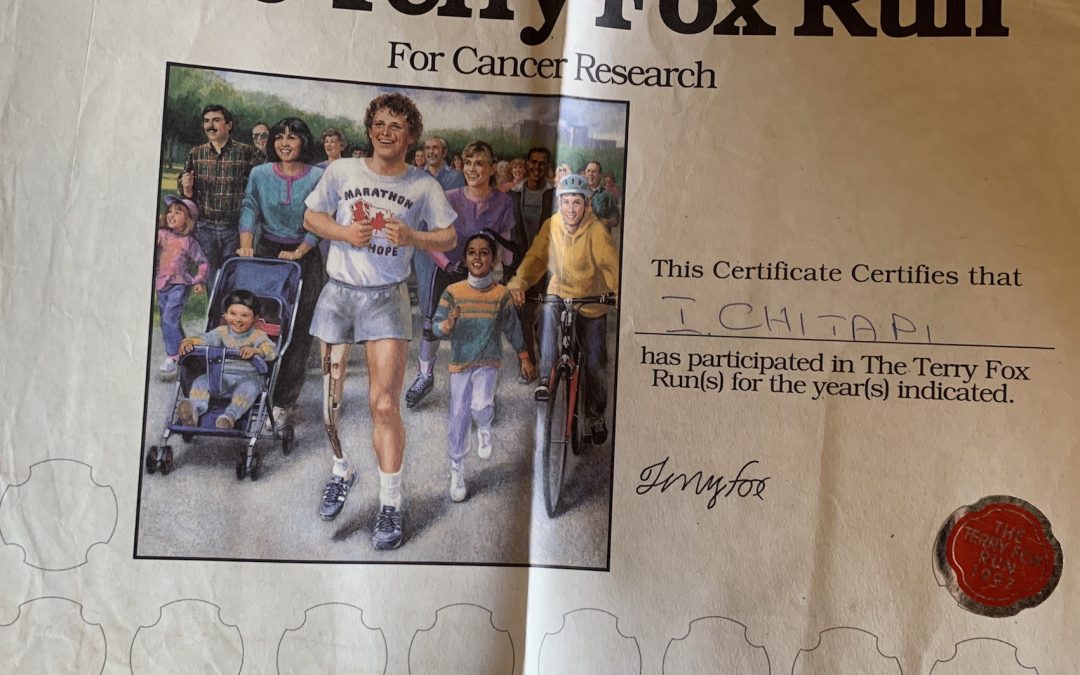 The BUDKIWAC series [Bet-U-Didn’t-Know-I-Was-A-Canadian] continues this month with a piece on the exploits of Terry Fox, in the month when we celebrate his life and commemorate the 39th anniversary of his death.

The fog of self-absorption and cozy ignorance in which one can spend years of one’s life can be quite frightening.  And even more terrifying is the realization that sometimes there are layers of ignorance to be peeled away like layers of an onion, and that they cannot all be stripped away in a moment.  I speak about myself, and I hope I’m not the only one who was incredibly self-absorbed as a teenager.  (Self-flagellating misery loves company)

So self-absorbed that even though I took part in at least two Terry Fox runs in Harare, Zimbabwe, during the late 1990s through my school, St. George’s College, I not only had no idea who Terry Fox was, I also really didn’t care.  I was probably more interested in the socializing opportunities afforded to me by signing up for an event that was popular with the students from our sister school.

Several years later – while it’s difficult to say precisely when, I want to believe it was on my first trip to Canada, in 2002 – I discovered that Terry Fox was Canadian.  Even then, I did not have a grasp of just how important and famous a Canadian he was.  It truly dawned on me only in 2019, on my second visit, when I learned that Terry Fox had been ranked second in an authoritative 2004 Canadian Broadcasting Corporation programme titled The Greatest Canadian.  Suddenly, I thought, “Wait! Who’s this guy again?”

Well, Terry Fox only attempted to run across Canada just months after having his entire right leg amputated due to osteosarcoma, and by so doing he transformed interest and investment in cancer treatment and research, probably worldwide.  His goal was to raise funds primarily for investment into cancer research, after his depressing experiences inside a cancer ward where he witnessed the deaths of many patients, as well as their suffering and that of their families.  He had been impressed by the fact that recent yet poorly-funded cancer research had increased his chances of surviving his own cancer to 50%.

Against his (and anyone’s) better judgment, he decided that he would run a marathon (just over 42km) every day from Newfoundland all the way to the Pacific Ocean in British Columbia.  A marathon, every. single. day. Thudding along on one good leg and one prosthetic leg attached to a sensitive stump.  A mind-numbing, joint-crushing 8,000km or so, optimistically named the Marathon of Hope.  Terry Fox died surely as much due to the toll this lion-hearted attempt took on his whole body as to the cancer that ultimately spread to his lungs, having accomplished about 60% of the run (over 5,000km) by reaching Thunder Bay, Ontario.

When he died in June 1981, nine months later, Terry Fox was not yet twenty-three years old.

But by then he had galvanized an entire nation, captivating, astonishing, inspiring and motivating virtually all Canadians.  By April of 1981, Terry Fox’s efforts had resulted in the raising of more than C$23 million, far above his original target of C$1 million, and effectively reaching his revised target of a dollar from every Canadian (Canada’s population at the time was about 24 million).  That’s a lot of money even now, but of course, almost forty years ago, that was a LOT OF MONEY.

Terry Fox’s impact was far more than financial.  In many ways it put Canada on the global map: people from all over the world contributed to the fundraising mission.  The story pulled on the heartstrings as well as the pursestrings.  The extraordinary, even bloody-minded, determination of an ordinary basketball-loving kid from a small town in British Columbia, had forced a nation to pay attention to the need for major investment into cancer, and as a result of his self-sacrificial efforts, the world would change for good.

Even to those who weren’t paying full attention far away in Southern Africa, more than a decade after his passing, Terry Fox made his mark.  I paid good money for my entry into those Terry Fox runs, and managed to keep at least one of my stickers.  So I too have been a contributor to cancer research, thanks to the remarkable legacy of a great Canadian, Terrance Stanley Fox.