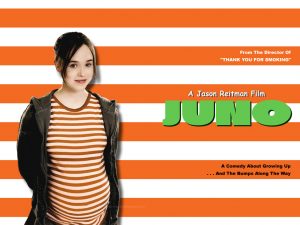 As I will be in Canada for the foreseeable future (whatever that means in the days of COVID-19!), I have decided to run a regular feature called “Bet U Didn’t Know I Was [A] Canadian!” The corny but cute BUDKIWAC will one day be a household acronym.  The objective of this column is to bring to light a prominent person, important organisation, institution or entity, or even an item or an idea whose Canadian origins or provenance is not generally known, or at least was not previously known to me.  The reasons for that will be various, although for many of us, myself included, one of the frequent reasons will be that we assumed he/she/it/they was/were American.  The distinction of being the first subject will go to Ellen Page.

I first encountered Ellen Page in the mid-2000s classic movie Juno, which was her breakthrough movie role, I’ve discovered.  She was nominated for a Best Actress Oscar for playing the title role, and has since starred in several high-profile movies and some TV series.  I’ve seen her in X-Men and she starred in the memorable Inception, amongst others.  Seems like she’s been around forever, and she’s still so young — just into her thirties.

Turns out she’s from Halifax, Nova Scotia!  Born and raised there.  I discovered this listening to an interview she had on CBC towards the end of March 2020.  She was speaking about a documentary called There’s Something in the Water, on which she has production and direction credits.  The documentary “highlights environmental racism” which is a novel phrase to my ears.  Perhaps it shouldn’t be, although it does sound a little dressed-up.  Racism almost always has a material aspect to it: something is taken or withheld from a person or from people on the basis of their supposed inferiority or unsuitableness.  “Environmental racism” is apparently the effective withholding of access to decent water and sanitation from some Nova Scotia residents, on the basis of their skin colour.  So to put it kindly, when it comes to “environmental racism”, in Africa we’ve been having it, for days.  And then some.

But let’s give Ms Page her kudos.  She’s observed something unjust going on in her own backyard, and she has had the gumption to use her considerable resources and talents to do something about it; namely, to shed light on an issue by making the documentary.  When I watch the documentary (soon, I hope), I will resist the temptation to roll my eyes, as I did when I heard her on the radio interview talking about how, growing up, she’d had no idea about the racist baggage of her province and country.  She’s doing something, and that is often – not always, mind you – better than nothing.  One problem is that many more people are likely to watch her again on Inception than to tune in to There’s Something in the Water, even if both are on Netflix.  But that’s not her fault.

There is more to be said about the lack of communal or public awareness of Canada’s difficult history with previously- and currently-racially-marginalised communities, to which Ms Page refers even in herself.  But that’s not for today, friends!  Today let’s celebrate the reclamation of Ellen Grace Philpotts-Page from the clutches of Hollywood hegemony back into the friendly embrace of Cool Canada!  (here I studiously avoid any COVID-19 references)